“Wikipedia is a world in which anyone of us has his own place”. Lena Ghazaryan 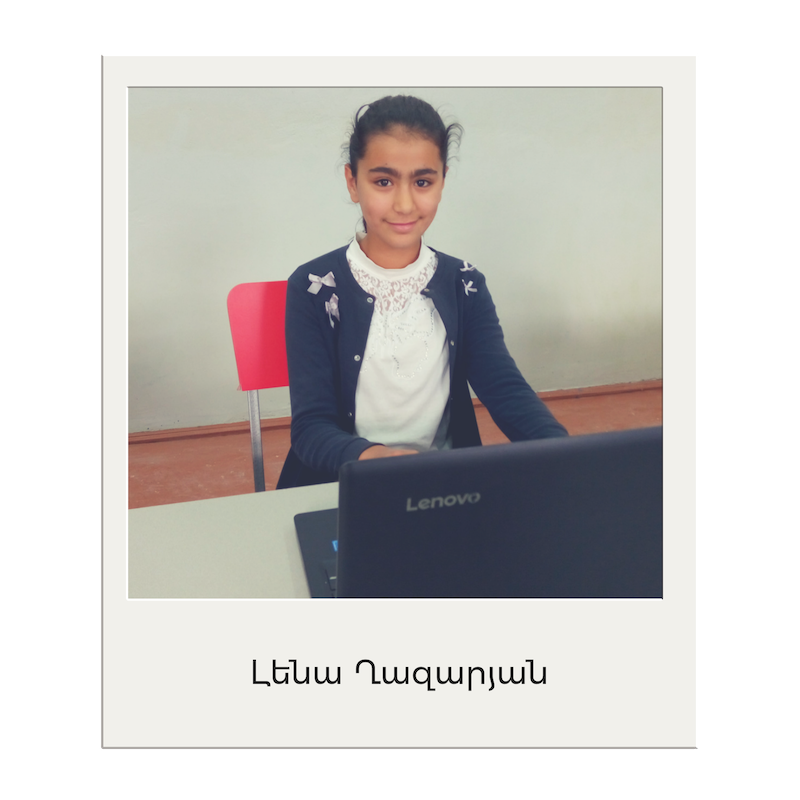 13 year-old Lena Ghazaryan joined Karvachar’s Wikiclub since the day of its opening in March 2017. She did her first wikisteps in Wikisource and Wiktionary. Lena’s first articles in the Armenian Wikipedia were dedicated to different villages in Atrsakh.

Lena tells that before attending the Wikiclub and editing at different Wikimedia projects she had no “outside the book” knowledge. Now she learns by both writing and reading articles in Wikipedia. “While writing about the villages of Artsakh I improved my knowledge of Geography . Then I started to translate articles. I translate articles written in simple English and Russian. I write about different topics, sometimes they are about movies, film directors, the kings of different countries and historical events”, says the clubber.

Lena is sure that through translating in Wikimedia Projects her knowledge of foreign languages has improved and she can feel the difference during the classes. “Now I read not familiar texts in English and Russian better and understand them easier. While translating the words in the class I often remember in which article I have seen it”, says Lena adding that the difference is obvious also to foreign language teachers.

The young editor is sure that “Wikipedia is a world in which any of us has his place and can find the field or project that interests him most”. Lena doesn’t only attend WikiClub every day but she also encourages her classmates to become editors in Wikimedia projects. She says that some of her friends are editors. “Sometimes I share information in the class we have not covered yet. My friends ask me where I have learnt about it. When they know about Wikimedia projects it is easier to explain. I also like sharing my knowledge with the others and if they do edit as well they will understand me better. I think that slow learners should undoubtedly attend WikiClubs to acquire more knowledge”, says Lena and points out that on the other hand Wikipedia needs fast learners. The young editor is sure the teachers should edit as well “especially foreign language teachers since they will translate easily and quickly. On one hand the quality of articles will be higher, on the other hand the teachers will improve their knowledge”.

Till now Lena has edited 65 Wikipedia articles. She is sure the number will still keep growing.

At the end let us note that Karvachar WikiClub has been opened since March of 2017 and has 20-25 active editors monthly. Most of them are the students of different classes from the local secondary school.

Your ticket for the: “Wikipedia is a world in which anyone of us has his own place”. Lena Ghazaryan

“Wikipedia is a world in which anyone of us has his own place”. Lena Ghazaryan